IŌĆÖve been following the political conventions from a distance and one issue stood out for meŌĆöintegrity. It seems that we hold our politicians to a much lower standard of integrity than we do leaders in the business world. My guess is that since almost all of the politicians lie, spin facts, or make outlandish unjustifiable claims we become numb to this subterfuge. 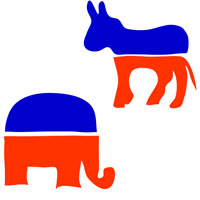 IŌĆÖm going to refrain from going into the details of the transgressions from both parties because the fact-checking sites perform a good service for us in this regard. I would like to analyze this situation in the context of how these incidents would appear coming from a business leader.

Now imagine yourself sitting among your peers in this audience, questioning the integrity of your new leader. Lapses such as this fall into what we call in the Industrial and Organizational Psychology industry as ŌĆ£bad bosses.ŌĆØ This is one of the few areas where we havenŌĆÖt created a fancy term for something quite ordinary.

Research has shown that the percentage of bad bosses out there may be in excess of 50%. Furthermore, research shows that an individualŌĆÖs relationship with their boss is one of the most significant reasons for leaving a job or staying.

I feel that integrity has two componentsŌĆöhonesty and matching words with actions. Honesty is easier to maintain than dishonesty. Once you cross that line you soon find you will need to remember what you said. Otherwise you will likely be caught in the inconsistency. Matching your (honest) words with action sends a clear message that you intend for your team members to act according to their words as well. In essence you should develop yourself as a good role model.

A propensity toward unethical behavior is generally detected by team members. ItŌĆÖs like fear, they can practically smell it. Further, research has shown that team members who view their boss as unethical have lower job satisfaction, and we know well that this drives turnover.

So itŌĆÖs not hard to make the leap that bad bosses drive turnover. Integrity is key.

Are You Raising Pay to Retain Workers?

March 13 in Communication, Motivation, Turnover by Joel DiGirolamo | No Comments

TodayŌĆÖs Blondie cartoon shows an example where the tyrannical boss, Mr. Dithers, tacks up a motivational poster and wonders if it will improve the performance of his workers. This cartoon, coupled with the anecdotal reports of companies raising pay to retain high performing workers, brings me to write this post explaining the relationship of three very important variables all leaders should understand.

Looking at our first variable, most leaders want team members who consistently perform at a high level, that is, having high job performance.

This begs the question of the second variableŌĆöhow to motivate workers to perform at that level. Roughly three decades of research from the 1960s to ŌĆś80s have settled in on the concept of intrinsic and extrinsic motivation. It was found that a segment of workers is motivated intrinsically, that is by challenges, promotions, and creating compelling products. Think Steve Jobs and his concept of putting a ŌĆ£dent in the universe.ŌĆØ Individuals, such as engineers and programmers are generally intrinsically motivated. They desire to create the next breakthrough product or service. As for extrinsic motivation, we frequently hear of sales people being extrinsically motivated by commissions, bonuses, and year-end trips and parties.

An important element in your success as a leader is to understand how your particular team members are motivatedŌĆöextrinsically or intrinsically. Some of the research has shown that extrinsic rewards can destroy intrinsic motivation. If youŌĆÖd like to read more about that, check out my previous post on motivation here.

Having laid this foundation, letŌĆÖs turn to the concept of raising pay to retain workers. Will it work? Possibly.

If a worker is extrinsically motivated, the additional money will likely have an effect on his or her performance and willingness to stay on with your organization.

If your level of pay is on par with other organizations and you have challenging work assignments for your intrinsically motivated individuals, then you probably donŌĆÖt have to worry.

I frequently use the accompanying chart with organizations to explain the relationship of these three important variables. Looking at the bottom row, low job performance, we can see that low performing workers will either be dismissed or quit if their job satisfaction is also low. IŌĆÖm not sure what it means if a worker has high job satisfaction but low job performance.

For individuals performing at a high level, if they are extrinsically motivated and not satisfied with their job they may stay and feel miserable or leave. Increasing the pay of these individuals may help greatly if that is one of the factors contributing to the low job satisfaction.

If the individuals in question are intrinsically motivated, and are suffering from low job satisfaction, raising their pay is unlikely to have any lasting effect. You need to find how out what motivates them and respond appropriately.

Bottom line: talk to your team members and find out what excites them. If itŌĆÖs money, fine. Otherwise, determine where their passion lies and find creative ways to plug into that energy. ThatŌĆÖs leadership.