Leadership in the Aftermath of Greg Smith

On March 14, 2012 Greg Smith, a Vice President in the London office of Goldman Sachs, resigned from the firm. The same morning an op-ed piece from him with a public explanation for his resignation was posted on NYTimes.com. Mr. Smith stated that he could no longer work at Goldman given the shift, in his opinion, from a strong customer orientation to concern solely for Goldman’s profit.

Reflecting on how you might respond to a similar situation is a good leadership exercise. I believe there are two facets, or angles, from which to view this situation—internal and external to your organization.

As a leader, I feel it would be crucial to reach out to customers as quickly as possible with a message describing your values related to customer satisfaction and providing specific examples where customer benefits were put before your own corporate profitability. As I have written previously, trust is an essential element of leadership. This message can be delivered without a reference to the op-ed piece, thus keeping Mr. Smith’s negative view below the radar if it had not surfaced at any given customer.

The second facet is more difficult. An important question is the accuracy of Mr. Smith’s views. If his views are a faithful representation of your culture then it is time for some organizational reflection and soul-searching. It may be important to ask yourself what cultural values you wish to promulgate and then make a concerted effort to assess leader behavior.

Your behavior speaks louder than your words. Maintaining awareness of your own behavior is frequently difficult although training in mindfulness can pay great dividends. Using a third party to gather qualitative and quantitative views of your behavior is a good complementary method of assessment.

While it may be easy to dismiss Mr. Smith as simply a disgruntled employee, an authentic leader will have the desire to dig deep within himself and into the organization for any lessons that may be gleaned from this unfortunate situation.

Is Your Leadership Energy in Balance?

March 20 in Balance, Energy, Trust by Joel DiGirolamo | No Comments

One of the angles from which I approach leadership and team development is that of energy. Viewing all interactions with others in an energetic sense is merely one of many views available. It is similar to wearing polarized sunglasses. When wearing glasses with polarized lenses, unless you turn your head at the right angle you cannot always see the electronic display on some instruments.

In an analogous fashion, if you work to attune your awareness you can begin to follow the flow of energy between you and your team members. I believe that it is important to balance the flow of energy in both directions—away from you and toward you.

Finally, where do your exchanges take place? Always in your office or a conference room? How often do you go to your team member’s desk? In general, your office will be perceived as a place of power, a place where the energy will flow from you. When you go to your team member’s office it is more a signal of energy flowing to you, although any actions on your part may thwart that flow and reverse it.

Balancing this flow of energy is difficult to maintain, particularly when leading virtual teams. As with most things, practice helps. Observe yourself as you interact with team members and superiors. After a while it will likely become second nature.

Are You Raising Pay to Retain Workers?

March 13 in Communication, Motivation, Turnover by Joel DiGirolamo | No Comments

Today’s Blondie cartoon shows an example where the tyrannical boss, Mr. Dithers, tacks up a motivational poster and wonders if it will improve the performance of his workers. This cartoon, coupled with the anecdotal reports of companies raising pay to retain high performing workers, brings me to write this post explaining the relationship of three very important variables all leaders should understand.

Looking at our first variable, most leaders want team members who consistently perform at a high level, that is, having high job performance.

This begs the question of the second variable—how to motivate workers to perform at that level. Roughly three decades of research from the 1960s to ‘80s have settled in on the concept of intrinsic and extrinsic motivation. It was found that a segment of workers is motivated intrinsically, that is by challenges, promotions, and creating compelling products. Think Steve Jobs and his concept of putting a “dent in the universe.” Individuals, such as engineers and programmers are generally intrinsically motivated. They desire to create the next breakthrough product or service. As for extrinsic motivation, we frequently hear of sales people being extrinsically motivated by commissions, bonuses, and year-end trips and parties.

An important element in your success as a leader is to understand how your particular team members are motivated—extrinsically or intrinsically. Some of the research has shown that extrinsic rewards can destroy intrinsic motivation. If you’d like to read more about that, check out my previous post on motivation here.

Having laid this foundation, let’s turn to the concept of raising pay to retain workers. Will it work? Possibly.

If a worker is extrinsically motivated, the additional money will likely have an effect on his or her performance and willingness to stay on with your organization.

If your level of pay is on par with other organizations and you have challenging work assignments for your intrinsically motivated individuals, then you probably don’t have to worry. 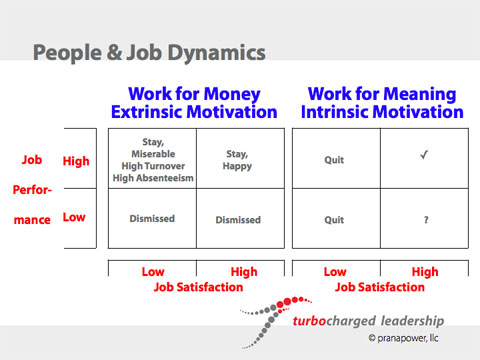 I frequently use the accompanying chart with organizations to explain the relationship of these three important variables. Looking at the bottom row, low job performance, we can see that low performing workers will either be dismissed or quit if their job satisfaction is also low. I’m not sure what it means if a worker has high job satisfaction but low job performance.

For individuals performing at a high level, if they are extrinsically motivated and not satisfied with their job they may stay and feel miserable or leave. Increasing the pay of these individuals may help greatly if that is one of the factors contributing to the low job satisfaction.

If the individuals in question are intrinsically motivated, and are suffering from low job satisfaction, raising their pay is unlikely to have any lasting effect. You need to find how out what motivates them and respond appropriately.

Bottom line: talk to your team members and find out what excites them. If it’s money, fine. Otherwise, determine where their passion lies and find creative ways to plug into that energy. That’s leadership.

Are You Giving the Gift of 5 Minutes?

March 6 in Communication by Joel DiGirolamo | No Comments

Last week I was speaking at a women’s leadership conference and enjoyed the keynote speech by Maggie Jackson, author of Distracted: The Erosion of Attention and the Coming Dark Age. In her talk she related the story of a woman whose boss would never give her his full attention. He would continually look at a screen, whether a cell phone or computer monitor, while attempting to carry on a conversation with her. The pain in her face was obvious as she exclaimed to Maggie,”Five minutes. That’s all I wanted—five minutes.”

As leaders, many of us feel compelled to remain as connected as possible to the network in cyberspace so that we can maintain a pulse on our team, our projects, and requests from superiors. This compulsion may be due to a self-imposed drive or from pressure above.

Let’s contrast this urge to stay connected with the network versus the need for a strong rapport with subordinates. Giving every team member your full attention is good leadership for many reasons.

First, it signals to the team member that you value them and what they have to say. It also shows respect, one of the most fundamental desires for us humans.

While I rarely see this behavior, I hear of it quite a bit. It’s worthwhile to ask yourself if you’re connecting with your team members and giving them your full attention—at least for five minutes.