Lessons From the Culture of Penn State

July 17 in Culture by Joel DiGirolamo | No Comments

This blog post has been difficult for me to write given the despicable nature of the crimes committed by Gerald ÔÇťJerryÔÇŁ Sandusky at Pennsylvania State University. Most of you know that he was convicted on June 22, 2012 on 45 counts of criminal charges for his sexual exploitation of young men at Penn State. 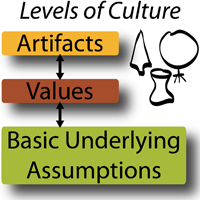 I feel there are valuable culture lessons for all leaders in the sordid action by Penn State administrators following each exposure of SanduskyÔÇÖs activities. As the Freeh special investigation report states, “One of the most challenging of the tasks confronting the Penn State community is transforming the culture that permitted SanduskyÔÇÖs behavior, as illustrated throughout this report, and which directly contributed to the failure of Penn StateÔÇÖs most powerful leaders to adequately report and respond to the actions of a serial sexual predator.”

The most poignant example of the role the Penn State culture played in the continued cover-up of SanduskyÔÇÖs activities is that of two janitors who had witnessed Sandusky engaged in an act with a victim. They both felt that they would be fired if they reported this activity given the untouchable status of the Penn State football program. Assumptions such as this are at the core of organizational culture.

IÔÇÖve been working with several organizations on their culture recently and find the model developed by Edgar Schein to be very useful. This model looks at organizational cultures from three levels: artifacts, values, and basic underlying assumptions. In the case of the Penn State example I highlighted above, we can easily identify the elements. The janitors assumed they would be fired because the university valued the football program above all else, stating, ÔÇťfootball runs this University.ÔÇŁ Artifacts supporting this were previous incidents where football players were treated leniently when involved in altercations which would have otherwise suspended them from the football program.

So I think this is an excellent example to learn from so that you can become more aware of the culture you have created for your team. If you wish to assess your teamÔÇÖs culture you can begin by asking the values they perceive and why they have that perception. Sometimes it is difficult to get a true reading from team members and it takes an independent third party for this analysis. An even more difficult task may be to pry out the underlying assumptions related to the values. One of the questions I like in order to determine assumptions is, ÔÇťWhat are some actions which may affect your employment here over the short or long term?ÔÇŁ

Cultural values are frequently communicated through stories of past actions and experiences. These stories are the artifacts present in all organizations. If you choose to change your culture, behave consistently with the new culture and continually communicate events, experiences, and behaviors by team members exemplifying the new values. These new artifacts will go a long way toward spotlighting the new direction you would like to head.

This entry was posted in Culture and tagged current event. Bookmark the permalink.